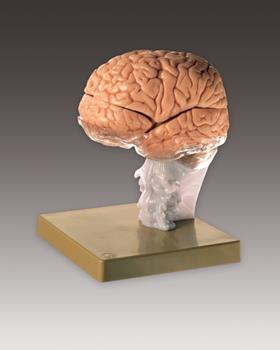 A highly detailed and deluxe model of the brain. This model is centered around and was built up form a life-sized cast of the ventricles of the brain. The large subcortical nuclei of the brain stem and the internal capsule are grouped around the ventricles of the brain in such a way that the complete brain stem can be seen. The limbic system (fornix, hippocampal formation) and adjacent part of the temporal and occipital lobes are then attached to the brain stem , completed by the addition of the corpus callosum and cerebral cortex. The complete brain structure rests in its natural position on a transparent cast of the base of the skull which doubles as a stand.
The brain separates in 15 parts as follows:
cerebral hemisphere (2)
temporal and occipital lobes with limbic system
cerebellum
frontal lobe
corpus callosum
brain stem (2)
corpus striatum
insula (2)
nucleus lentiformis (left)
internal capsule (right)
ventricles of the brain
base of skull
made of durable Somso-Plast®,
Size: 6" x 7' x 9"
made in Germany by Somso Modelle

This product hasn't received any reviews yet. Be the first to review this product!